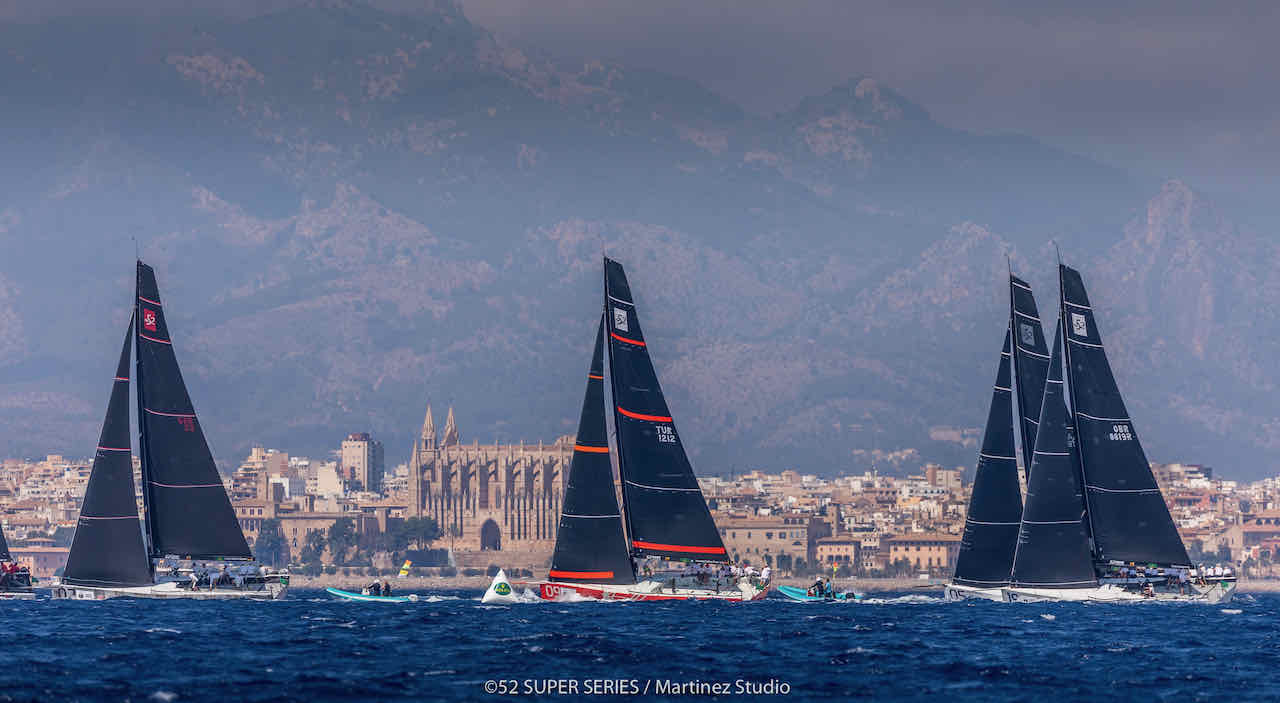 When the 52 Super Series returns to competition next week with a bumper fleet of 16 TP52s racing Bay of Palma, Mallorca, the form book will be rendered blank.

It is almost impossible to predict which teams will collect the overall honours at the Puerto Portals 52 Super Series Sailing Week & TP52 20th Anniversary Invitational Regatta.

Nine top level 52 Super Series teams finally return to the white heat of battle. There has been no circuit regatta since March 2020 in Cape Town. And seven invited TP52s of various generations will face off in a competitive fleet spanning much of the proud 20 year history of the global box rule class.

After the long lay off for the 52 Super Series it will almost certainly be the team which finds its marks quickest that does best. Indeed the first few races might prove crucial. The difference between winning and a finish at the back of the fleet is usually down to the fractions of a metre gained and lost round the course.

The winning advantage is often down to superior communication and perfectly choreographed manoeuvres, a tiny boatspeed gain here and there thanks to smart sail trimming as the wind speed drops or rises. And so the lack of competition and inevitable ‘ring rustiness’ may prove telling.

“Nothing comes close to racing in this fleet. I am so excited to think of seeing this fleet back in action. I love nothing more than watching Terry at work, seeing top end tacticians like him and Vasco, Ado Stead and so on doing their work. The tactical chess game is stunning and after all this is still the sailboat racing that 98% of sailing fans participate in and enjoy most” grins Ed Reynolds, longtime project director at Quantum Racing.

Hutchinson’s enduring rivalry with Vasco Vascotto is back too. Vascotto will sail with Vladimir Liubomirov’s Bronenosec crew partnering Morgan Larson and the fiery Italian may provide a regatta winning differential for the Russian flagged team.

With a ‘best of British’ afterguard on Gladiator, Tony Langley is gunning for his first podium since 2017 in Menorca. He brings on board Giles Scott who is fresh from a stunning defence of his Finn Olympic title in Tokyo. Scott, whose tactical calls in the America’s Cup were breathtaking, will partner Paul Goodison in the Gladiator afterguard.

Olympic medallists, America’s Cup winners and world champions feature all the way through the 52 Super Series fleet. In the line-up of the Plattner family’s Phoenix we find the very much on form Australian Tom Slingsby who sails as tactician, while Kiwi two-times Olympian and Finn Gold Cup winner Josh Junior brings youthful brains and considerable power to the heart of Takashi Okura’s Sled.

Slingsby, America’s Cup winner and Olympic gold medallist, has just triumphed as tactician on his debut in the ClubSwan 50 fleet on the Bay of Palma at the Copa del Rey. But maybe Andy Soriano’s Alegre team come to Puerto Portals as the most practised? They ran two training camps in Valencia and have just warmed up by winning the IRC division at Copa del Rey, topping a competitive fleet after six days of racing.

Alegre’s British strategist Nic Asher finished the Copa del Rey concluding, “We are in good shape I think. We had not raced for such a long time together it is nice to have been back. It is good to have come here and validate a few things. And getting the win is always nice.”

Austin and Gwen Fragomen’s Newport RI based Interlodge return to the 52 Super Series with a strong team which includes Tony Rey, Rod Dawson and Juan Vila in the afterguard, racing the former Azzurra, the well sorted 2019 champion boat.

Meanwhile the successful afterguards remain entirely intact on Ergin Imre’s Provezza – where helm John Cutler has Hamish Pepper as tactician – and on the double world champions Platoon where Jordi Calafat and John Kostecki combine. Provezza may gain a speed advantage in certain conditions from having a brand new rig, the most modern in the fleet.

Seven teams have answered the call to race and celebrate the TP52s history in the Med. Perhaps the most successful global campaigners of recent years is Karl Kwok’s Beau Geste crew led by Gavin Brady but Italy’s Marco Serafini’s XIO were 2019 ORC World Champions triumphing in Sibenik ahead of Roberto Monti’s Air Is Blue. Newcomers are the Thailand flagged former Team Vision Future.

And from Saint Tropez, France is Gerard Logel’s well sailed Arobas, a team just as easy competing offshore in the Rolex Giraglia as inshore in the Copa del Rey. The fleet is a fascinating mix of pros, semi-pros and amateur racers all looking to enjoy a good week of racing and some have already indicated they would like to dip a toe in the 52 Super Series waters in the future.