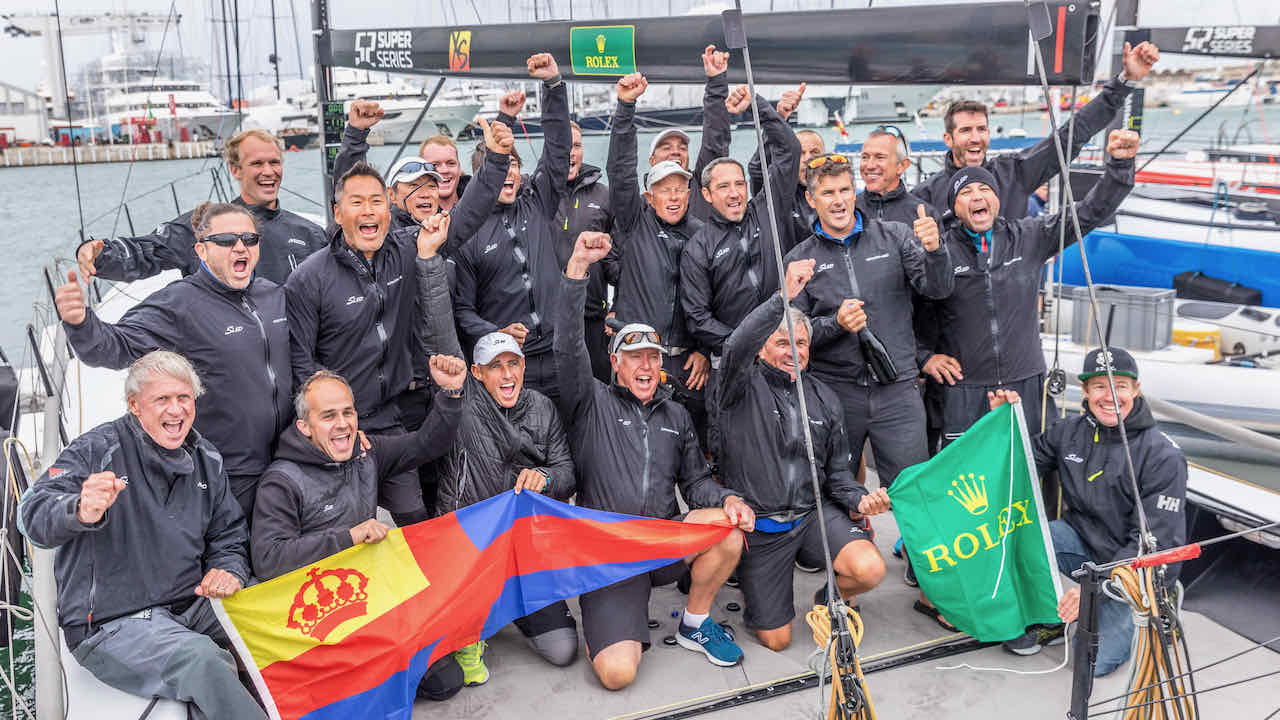 Winning by the slimmest of margins Takashi Okura’s TP52 Sled team were crowned 2021’s 52 SUPER SERIES champions and Rolex TP52 World Champions Saturday in Palma, Mallorca. They join Azzurra and Quantum Racing as only the third crew to have won the circuit’s top honours.

Holding a lead of one single point on both championships scoreboards the team which won two of this season’s three regattas had a nervous wait ashore today until scheduled racing had to be finally cancelled because of gale force Mistral winds on the Bay of Palma.

Their overall victory required them to overcome successive crew line-up changes imposed by travel restrictions. All of their core Japanese sailors had to miss the second regatta and substitutes found. Usual Australian ace Adam Beashel called tactics for the first regatta win in Puerto Portals in August but Italian Francesco Bruni then had to step in cold when Beashel could not travel for the second and third events.

Sadly the passionate owner-driver could not attend this season because of the health situation but his crew and the circuit paid a warm tribute for making sure Sled was on all the start lines this season, as they did to other owners such as the Plattner family’s Phoenix which finished fourth.

The closest season yet with five leading boats arriving in Palma last week within four points of each other, on Friday the foreshortened three event circuit went right to the wire. But a substantial win in what proved to be the breezy final race of the season proved conclusive, allowing Mr Okura’s crew to run out with a winning margin of just one point ahead of four times 52 SUPER SERIES champions, Doug DeVos’ Quantum Racing. Third overall for the season, two tantalising points behind, was Harm Müller Spreer’s Platoon which has been overall runners up three times.

“We are just delighted,” Sled’s winning helm Murray Jones said. “It was hard to sit around and wait when we really were keen to get out there and race. We like sailing in the breeze as a team. We were a bit disappointed not to go sailing but we’ll take it!”

Sled tactician Francesco Bruni added: “This class is the pinnacle of the sport and it’s great to see the TP52 class with this strength again. I think it’s going to stay strong, and this year has been really incredible, it is impressive that the circuit has boats with such a high level.

“And this has been a real team effort. Without a doubt, this week was a bit tougher than the usual because of the stress and the nerves. Concentration was the key and trying to overcome the bad moments, which we all had. In the end it is a very close competition: one point has decided the whole season.”

Sled have been on the 52 SUPER SERIES since joining in January 2014 and finished on regatta podiums eight times. They proved a class apart at 2019’s season-ending Porto Cervo event where Mr Okura helmed to victory and now finally break the Azzurra-Quantum Racing duopoly which has reigned for eight full years on the world’s top grand prix monohull circuit which next year will celebrate its ten years anniversary.

“At the end of the regatta you always feel like you did everything you could,” De Vos said. “Everyone is going to look back and think where did we lose a point where could we have gained a point? Especially being just one point behind Sled. But they did the same thing, they had to fight for every point they got. You’re happy with good competition, you look at the result and think, ‘we did our best.’

“To be in this class and to be competitive in this class is a thrill for me.To see the quality of all the sailors, all the owners, all the programmes and to be in the mix here is a complete thrill. I pinch myself every day when I walk down the dock and see everybody. The commitment they have, they talent out there and the way all the teams work. The shore teams, the crews on the boats and to see the effort that goes in to be the best they can be, I’m just thrilled to be part of it. And it is great for the class to have a new winner.

“The level of the competition with how close the World Champs were and how close the season championship is you see that there are some great teams that have really embraced the spirit of the TP52 super series and have made a lot of commitments. Anybody can truly win.”

“It seems like it ends up this way almost every season, one or two points missing and so you think back to one penalty or one over early and you just want it back again to give it another chance,” he said. “But the mood is still positive. It’s a great team and it’s a great class. Every leg is a challenge, every race is a challenge and every regatta so it’s a pleasure to be here.”