Skip to content
You are here
Home > LATEST > 52 Super Series: Pressure mounts in Palma on eve of World Championship start 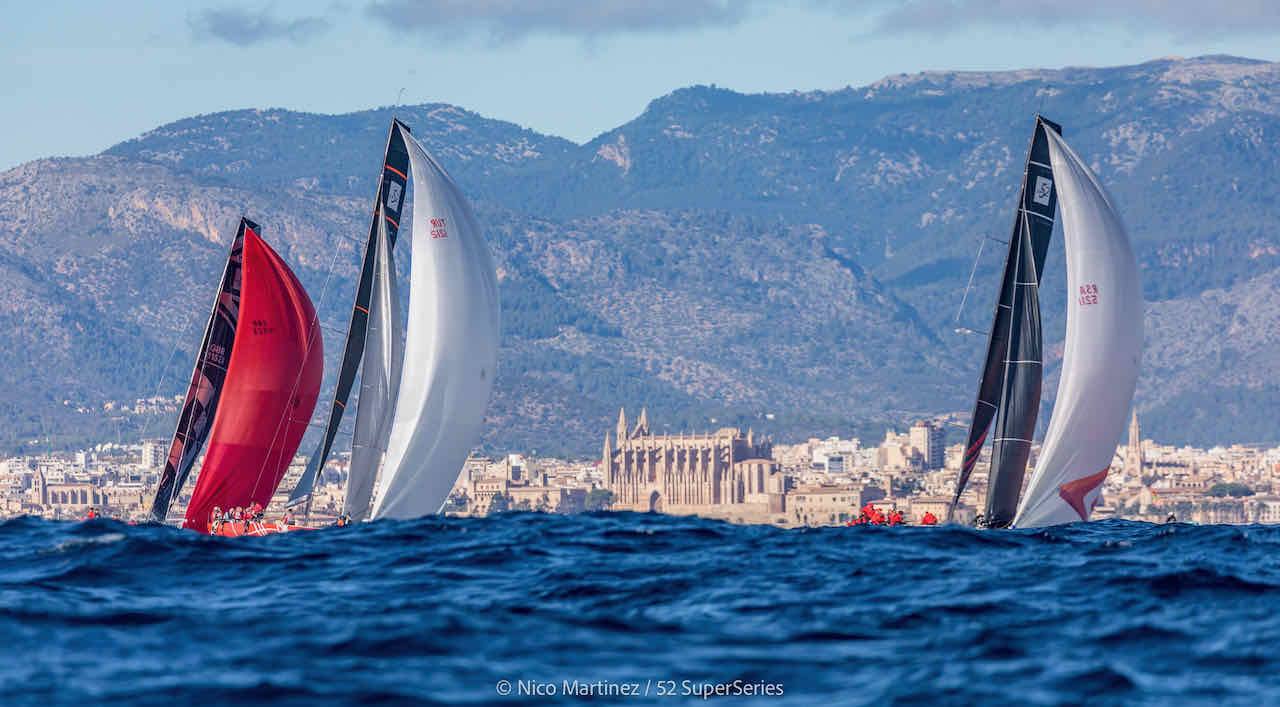 Nine of the highest calibre grand prix sailing tacticians in world sailing took to the stage at the Real Club Nautical de Palma in Mallorca this evening to officially launch the Rolex TP52 World Championships which start tomorrow Tuesday and which will also decide the winners of the 2021 52 SUPER SERIES.

Also on stage was the German owner-driver Harm Müller-Spreer who has steered his Platoon to two Rolex TP52 World Championship titles and whose crew are the narrowest possible leaders of the 52 SUPER SERIES going into this final event.

“Anything can happen here. You can’t take anything for granted here on the Bay of Palma in November, we can get offshore northerly winds which would make it very difficult. And the level is so high and it is so close that any one of a number of boats could win here,” warned Müller-Spreer, whose team have finished runners up for the overall 52 SUPER SERIES title three times.”

Leaders of today’s official practise race and winners of the weekend’s PalmaVela warm up regatta were Vladimir Liubomirov’s Bronenosec, evidence that they are peaking at just the right time to be serious challengers for the world championship title, and – warns tactician Vasco Vascotto – the overall 2021 title is not out of their reach.

They may lie sixth overall, eight points off the top of the leaderboard but the Italian Vascotto who won the World Championship before with Azzurra considers that with only eleven races completed over the two events so far and up to ten races scheduled here, there is still enough time and races for Bronenosec to be season title contenders going into next Saturday’s final races.

“I think if you evaluate our chances based on Palma Vela and today then for sure we are competitive,” Vascotto reflected. “We know also know that it will be difficult. Our history so far this season shows we have sailed nicely most of the time but with some big shockers, big mess ups. We need to avoid that. Our speed is good. We have improved that after the first event using things we know from the past a bit, and it looks like we are more consistent in terms of speed.”

“We have worked together on tactics for two years and a lot of the time on Luna Ross in the Cup he was not just the main trimmer but was doing tactics too,” Sibello said. “We have a good dynamic together and our dynamic right through the team is great now. We have not sailed a lot of races so far and for a team which like made a few big mistakes, then you pay a big bill, that really costs you until we sail more races. Now this week if we can have ten races if we can race well we can do well.”

Asked how he balances the risks that they need to take to push to win the season title versus focusing more on delivering a world title, Vascotto smiles.

“That is a tough call. To win would be a miracle for us but you know that I want to win. But to win the overall title we need to take some risks and I know that is hard. It is very difficult and we need a perfect week. You need to take some risks and I am not sure that is way for us to go. Mostly I want a lot of races this week, then let us see. I say my prayers and let us see.”