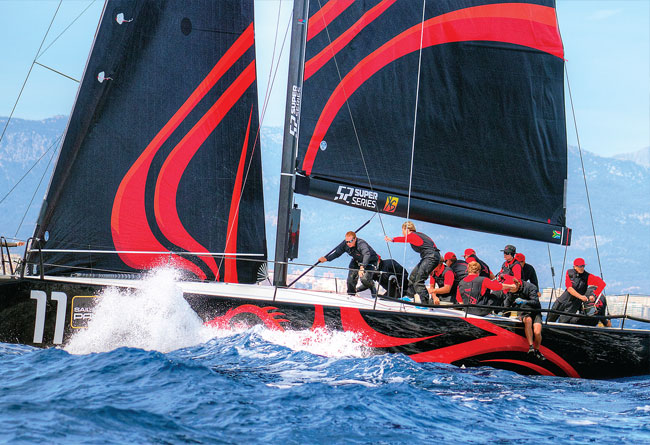 As a dress rehearsal for the start of the latest 52 Super Series there could have been no better event than the latest edition of PalmaVela.

Ten of the 11 boats due to contest the first regatta of the season, Menorca 52 Super Series Sailing Week, turned out and gave no quarter. The 2019 race sails were on (at least for most days…), full sailing teams were stress tested and the Bay of Palma offered up an unusually varied menu of wind conditions including a couple of classic 20kt+ doses of champagne conditions (Cristal of course).

As what promises to be the most even, most open Super Series to date begins, the organisation and the owners also appear close to taking the plunge to go to South Africa in the early part of 2020 for one or possibly two new regattas. The initiative is being partially driven by two of the circuit’s most recent recruits who are now based in the country – father and daughter Hasso and Tina Plattner campaign their two Phoenix TP52s in Europe and for training race Cape 31s in their local Cape Town fleet.

Certainly among a cross-section of owners there is a wave of enthusiasm for a longer, more varied season, one that is not just restricted to 90 per cent Mediterranean hotspots punctuated by occasional visits to Cascais, Puerto Sherry or Croatia. For owners, crews, circuit stakeholders and managers who are trying to look long term, one vision for 2020 and beyond includes South Africa and progress towards New Zealand during the 36th America’s Cup in 2021. Others, however, are perfectly content with the status quo – more of the same – while a third contingent are basically happy to give their endorsement to whichever course the majority opt for.

But one requirement that is pretty much inherent to extending the calendar globally is that the class rule would need to be frozen until after 2021, since a more crowded logistics schedule would leave insufficient time to build the next evolution of designs.

On the one hand that affords a certain longevity to the current generation, but at what cost? The TP52 will be 20 years old in 2021 and so far, thanks to Rob Weiland’s astute rule management in concert with the main design studios, evolution has outrun Darwinian natural selection theory.

If the 52 Super Series could get to South Africa it would be the first time the class races in the southern hemisphere (notwithstanding the nascent Australian TP52 group). And with no ocean race going to Cape Town it would be an extremely popular move for the local authorities and for local sailing fans, so far otherwise starved of this level of grand prix action.

Two regattas – early March and early April – closer together than the two previous sojourns to Key West in January and March in Miami, then free up an extended summer hiatus, with no events between late July and mid-September. This allows owners and crews the chance to enjoy family life in the high summer, to choose to race at other non-circuit mixed fleet regattas and, for those who like to or need to, to go to work…

‘I feel to repeat what amounts to a Med circuit year on year gives us too limited a number of owners who potentially like what we offer,’ explains class manager Rob Weiland. ‘Long term it will produce fewer participants, at best there will simply be no growth from the 10-11 boats we have now. Ideally you would like to race where there is a local fleet. In the Med Cup days of course there were six or seven Spanish boats. Between them and owners and crew who flew in year in year out, you had a nice loyal base.’

‘If you look at our sailing world now I only see the potential for a “TP52 home fleet” in the USA, Australia being too far to travel to regularly.

‘We have always hoped for a second series in the US and tried to stimulate that, so we could hop over and find a more or less organised fleet to join and vice versa, but somehow in the US to agree on racing as a class seems too hard. Like the Pac52s, two years on, history. The current 52 Super Series owners also don’t support racing in northern Europe, another place you could expect to trigger a few local owners to switch to a TP52.’

Weiland contends: ‘When looking at younger owners, between 50 and 60, they often still work, have children at home and for them the 10 days of sailing, three weeks off, then another 10 days of sailing all the way through the summer, does not appeal. And whether you believe in the media component or not, if you have the same backdrops year after year the story gets boring. Not enough surprises. For sure a change of scenery is good for many reasons.’

‘I do not like the fact we are so pressed over three or four months in the Med. For me as a businessman and a father I enjoy it much more if there can be a gap of five or six weeks in the middle of the summer. It is better to start in January or March in Key West or Miami or in this case South Africa and then that gives me options in the summer,’ says Harm Müller-Spreer of Platoon, title runners-up in 2017 and 2018 and tipped with the best chance of toppling Quantum this year.

For Müller-Spreer the extra cost of travelling further afield is repaid several times over by the idea of a summer break. ‘If you are talking about money in this class you are on the wrong page. If you are adding another 100,000 euros to go to South Africa you do it. It’s worth it.’