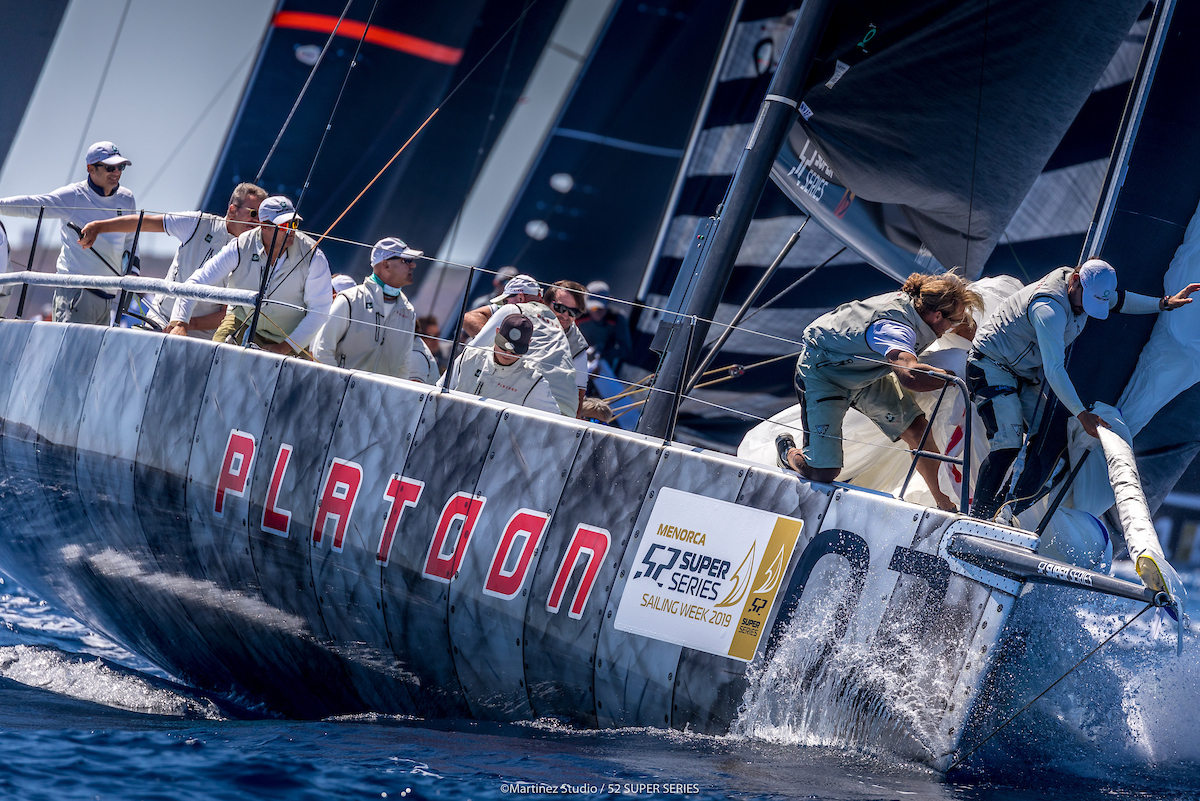 Ask around the dock during the Valencia training week in March which team would be most likely to win the 2019 52 Super Series overall and the smart money already seemed to be on Harm Müller- Spreer’s Platoon.

Twice runners-up, behind Azzurra in 2017 and Quantum Racing in 2018, the team that won the Rolex World Championship in Scarlino in 2017 showed a slight all-round speed edge during the training week – but then slipped up at PalmaVela itself when a couple of instances of pushing a little too hard in boat-to-boat situations cost them the regatta.

It was not a surprise then to see Platoon, helmed by the threetime Dragon Gold Cup winner, top the podium in Menorca at the first round of Super Series proper. It was, however, rather less anticipated that the two latest Vrolijk designs, Platoon and Provezza, would end up 1-2 in the regatta.

This core group have now been together for several years: Kostecki, Dirk ‘Cheese’ de Ridder and Ross ‘Rosco’ Halcrow won the 2001-2002 Volvo Race together and were part of Oracle’s America’s Cup-winning team in the 2010 Deed of Gift Match.

Though he is the defending champion Müller-Spreer is not too interested in the owner-driver trophy. Success for him is winning against the professional helms. He is very much a hands-on owner who participates in all the important decision making. And while he embraces the tiny details that make a difference it is the human factor, the creating of a successful team and enjoying all the challenges together that really inspire him to compete at this level.

‘We have been sailing for at least four and maybe five years now with the same team, just making little adjustments. That for me can be the key to winning events and maybe winning the season,’ he says. ‘So here we are now, but if I am buying a boat like this and with this team I am wanting to win. For sure…

‘But you have to be realistic, and the realistic answer is that we have a chance of winning. But we need some luck.’

Last year Platoon in particular and the Vrolijk designs in general proved to be weak in the strong breeze, especially in Cascais’ big winds and seas for last year’s world championship when the German team had one of their weakest regattas. Vrolijk’s Tobias Kohl explains, ‘Last year Platoon was extremely strong in the light stuff but clearly lacked in the middle stuff and above.

‘We had a new keel for this year as last year’s construction arrangement was deemed out of class, but mainly we fine-tuned the balance of the boat for that upper wind range. So today there is a new fin and also a new rudder. The new fin profile is a bit fatter for bite when holding a lane and the rudder moved aft to ease up the helm slightly, a very marginal shift of the bearing.’

Calafat, a key component in the Platoon loop, adds, ‘As the main issue last year was that in the breezier stuff we could not release the helm enough, the aim was to reduce the rudder angles downwind just a bit, especially in the breezier stuff. So far it seems to have worked pretty well.’ The belief is that 2019 will be a breezier season overall, except in high summer in Puerto Portals. ‘That was a big driver. Nearly all of our changes relate to the fact we expect more breeze this season.’

‘Both our teams are quite happy,’ Kohl adds. ‘The big changes have been made and the teams are really positive. Now it is about moding the boats to each event – the big test will be Portals which sticks out as we all expect it to be light. So we will just have to get back as much of the super good light wind performance as we can!’

With their Quantum wardrobe Platoon work hand in hand with Quantum Racing in an open book, data sharing programme which is unusual too for the ‘no hiding place’ empirical approach, sharing coaching debriefs and development meetings.

But Calafat alone drives the design side for Platoon. He explains: ‘We have significantly lighter sails now and did a lot of work to our AP main and the J2 and J3. Last year we felt we were super strong below 11kt which was OK for most of 2018 but not for this. 2019 will be a windier season. But with our changes we now feel we can race in the breeze.

‘Harm knows what to do. He understands everything we ask of him. We are working a bit more at controlling the boat together at low speeds. It is so important to get good starts. Our approach depends a lot on the wind speed and the bias. Otherwise it is all down to the final launch.’

Asked what he sees as the key strength of the team Calafat explains, ‘John [Kostecki] is great. He makes it easy to be honest with ourselves because he is. When it is wrong he accepts it and there are no big dramas. And we take strength together from having got results out of bad situations. But we are also pretty critical of ourselves which keeps us developing.’

He smiles, ‘But we also don’t like long meetings – we talk for 15 minutes max, we keep it very simple. We are a good group. Cheese and Rosco are so good and talented we can get all the information we ask for almost instantly.’

Müller-Spreer, a veteran of the MedCup years, came back to the class in 2015 and is clearly thriving at the front of the fleet. And success drives him:

‘You cannot buy trophies. In our lives you can buy everything with money… normally.

‘But this you cannot buy. Here you need a team of 13 guys. Everybody has to accept everyone else and they have to enjoy sailing together for a long time. Otherwise it won’t work. You so often have situations where you are in the wrong corner and everybody’s head is down, but you have to keep yours up to win the whole thing.’

He continues, ‘You have to develop together or you get nowhere. You have no chance. Life is about learning. Business is different. In my business I work on projects, project by project, and each one is different. There is a formula to win here but the best thing I like is that it is real time, there is no handicap, no looking at your watch. Everyone has more or less the same tool and can win.’

In recent years he has had to make tough decisions to move his programme to the next level, replacing close friend and longtime sailing partner and fellow Dragon champion Markus Wieser as tactician with Kostecki, and this year bringing in Jules Salter as navigator.

‘I enjoy the small technical details, but most of all what I enjoy is people. It’s so important. All the time I am talking with the core group but ultimately in this programme it is me who decides.

‘If there are arguments on the table we weigh up the different opinions. For example, are we changing different positions on the boat? This year we changed the navigator. That was a difficult one. A difficult situation. Johan [Barne] was such a lovely guy but the work with the afterguard was not perfect enough. So we made a change. It is not that Johan could not do it, he is a fantastic sailor.’

‘I don’t worry about the owner-drivers. I am here to challenge the pros. If I am winning I am the best in the fleet. If I am losing I am not the best.

‘That is the clear distinction for me. I have raced in Dragons with 120 boats on the line and 20 Olympic medallists; but here we basically all start with the same tools and I really want to win. Of course we do also sail in some great places…’