Skip to content
You are here
Home > Advertorial > 52 Super Series: And the fat lady sang 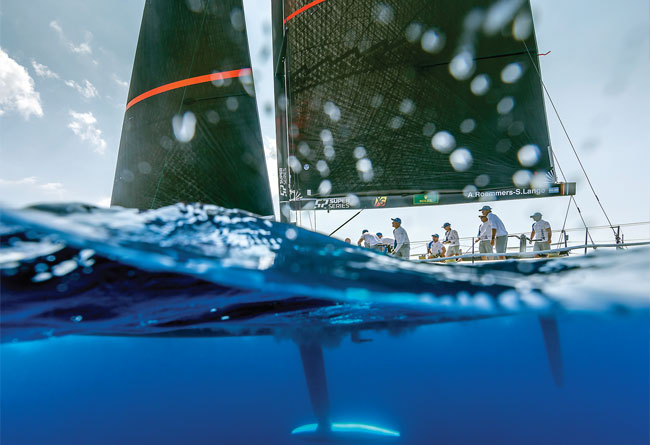 Consistency won the 2019 52 Super Series title for Azzurra. At five regattas they finished as the runners-up, each time pained by how close they had come to winning that title. But the crew that is led by Guillermo Parada and sails in the blue of the Yacht Club Costa Smeralda played the long game better than anyone this year, never taking their eyes off the top trophy and what is their fourth, and hardest won, season title.

Azzurra have the complete package. There is no doubt that tactician Santi Lange required some of the 2018 season, his first full year back in the class since 2014, to get on top of the latest subtleties of this, the highest level of inshore grand prix competition. But this year his risk management has been second to none – he rarely puts Azzurra in high-stress situations yet is still prepared to split from the fleet when extra points are seemingly on offer.

‘We are sure Azzurra got a little quicker through the season, and we are pretty sure that changing their rudder after the early-season Valencia training sessions and sailing with more and more rake through the year were a big part of it,’ suggested Simon Fry, trimmer on the Vrolijk-designed Provezza, with whom Azzurra sailed as tuning partners this season. Fry places Azzurra firmly as one of the quickest three boats this year and especially potent in 12-17kt TWS.

According to Fry, Azzurra appeared to give up a little of its previous ability to go fast, bow down off the startline, in favour of being able to sail a higher mode to hold her lane. And holding lane is always the first thing mentioned wherever TP52 performance is discussed.

Azzurra and others seemed to learn from Luna Rossa’s 2018 set-up with deeper, more twisted jibs but using a straighter leech design which makes a change in car position that much more powerful. These changes are still subtle, however, but they are understood well by Azzurra’s sail designer Juan Garay who previously filled the same role with… Luna Rossa. In 2019 Azzurra also ran four mainsails, light, medium, AP and super-heavy.

For certain this year the team also dealt with pressure better than in 2018. It would be true to say they worked tirelessly through last winter, spurred on by finishing a, for this team, painful third overall in 2018 (and missing second on countback to Platoon). They are one of the very fastest boats in the strong breeze and have noticeably improved their light to medium airs set-up; in part at least this is down to their steady work with tuning partners Provezza who, along with Platoon, were the quickest two boats this year in light to medium conditions.

‘Azzurra were super-consistent and improved a lot in the way they worked the geometry of the course,’ said Platoon’s strategist and sail designer Jordi Calafat, a former Olympic gold medallist in the 470. ‘They very rarely got to the layline too early, for example. Downwind they were very fast and Santi did a good job of always keeping his options open, only banging the corners when he was superconfident of the outcome.’

Second for the third year in a row, but Rolex TP52 World Champions for the second time in three years, Platoon were hurting after this year’s final day of racing. The improvements they had made through last winter had definitely given them a boat that was more competitive in the strong winds of Cascais and Porto Cervo, where last year they struggled. Platoon were in the title battle until that long last day, but the harsh reality is they had left too many points on the table in Cascais. Then, to make matters worse, when they sought to clinch the world title in September, in Mallorca, the German team were handed three expensive penalties, finishing eighth and ninth in the last two races. At that point the task of also winning the Super Series became an uphill struggle…

‘There was a lot at stake and we wanted to win the worlds but a succession of things went wrong,’ admits Platoon’s America’s Cup-winning trimmer Ross Halcrow. ‘Even having a penalty from a start which was then postponed… that was another costly lesson.

‘But there is no doubt we made good improvements around the rig and sail programme, we were generally very happy with our setup and could hold our lanes well when we got good starts.’ Both the Vrolijk designs, Provezza and Platoon, cross-sheet their jibs J/80- style which Halcrow considers an advantage from 8kt to 11kt up.

Halcrow says they are still working at being able to keep the bow up for longer in marginal planing conditions, their pioneering move to fit a third pedestal aft definitely helping. At least three or four other teams are now looking at a third pedestal for next season – which starts in the breezy flat-water conditions of Cape Town where good planing performance will be critical. However, class rules only allow two such changes each year, so take that extra pedestal off for subsequent light-air rounds and it must also stay off for the season finale in Porto Cervo with its propensity for mistrals.

‘Next season is going to be a whole new challenge because we will start out with the windiest regatta, the first one in South Africa,’ says Halcrow. ‘The second event, the Rolex TP52 Worlds, will be slightly lighter, and then we go to Scarlino where it will probably be lighter still. Plus the time to make changes is shorter than ever as the boats need to be ready to go on the ship for South Africa.’

Quantum Racing took third for 2019, just two points behind their training partners Platoon. In this high-quality, very even fleet they had a hatful of extra variables to contend with this year, not least a change of leadership style following the departure of Terry Hutchinson to American Magic.

Factoring in seven changes in the crew line-up in total, integrating owner-driver Doug DeVos to steer at the last two events of the season, was a big ask in such a high-level fleet. By the final regatta Cameron Appleton also appeared to be playing strategist to Ed Baird as tactician, the opposite from how the two had divided the roles at the start of the season.

That the championship was diluted at the last down to a threecornered title bout between Platoon, Azzurra and Quantum was evident in Sardinia as soon as the rig came down on Provezza. The Turkish team had proved electric in the 8-11kt range but still lacked the heavy-air performance needed to win a long series of 50-plus races… and with no discard.

So too Alegre won many races and were especially quick downwind in the breeze but equally had too many off days, while Bronenosec need to temper their game with slightly less risk-taking to cut down on unnecessary penalties.

But never mind everyone else, the talk of 2020 is Sled.

The Japanese team coached by Rod Davis was outstanding in Porto Cervo with a great heavy-air set-up. They took six of the nine races, five on the trot, which is unprecedented in this inch-tight fleet. Sled ducked Cascais to compete in the 12 Metre Worlds in Newport and so arrived in Sardinia with their strong wind sails still fresh. Nevertheless the team had clearly developed settings that were suddenly being scrutinised to the nth degree by their rivals (or rather their coach RIBs) as the Porto Cervo round progressed.

All the other crews are mindful of the risk of being similarly thrashed when the Cape Doctor does his rounds early in 2020. Now there’s a thought for the competition to take with them into a long winter break…
Andi Robertson