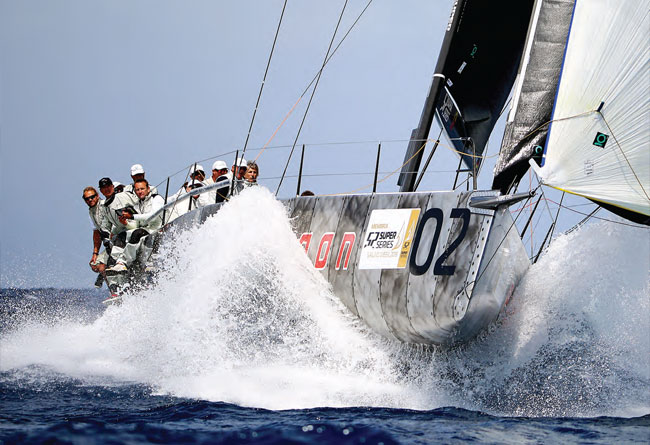 Local knowledge, smart, confident sailing and the benefit of a good couple of weeks of two-boat training and testing all played a role in Plattner’s well-deserved second overall.

The build-up to Cape Town also saw the next step forward for Njord Analytic’s newest suite of advanced performance analysis tools. The German-based company, led by Jonas Witt, grew from SAP co-founder Plattner’s own dissatisfaction for what he saw available when he and his daughter Tina started working up the two Phoenix TP52s in 2018.

In Cape Town Quantum Racing and Platoon as well as Plattner’s Phoenix teams all utilised Njord’s new live analytics product. This now allows two boats to line up and the coaches in the coach boats to see all of the live boat data in real time. Previously, according to Njord’s Witt the old system would reproduce only one boat’s data. Now they can run tests when boats line up together to see real-time averages of all the key variables, highlight differences and get live updating VMG gain/loss analysis.

Njord was originally seeded by Plattner and driven by the Phoenix teams. Witt is a highly talented, approachable and pragmatic young software engineer and entrepreneur who trained at the Hasso Plattner Institute in Potsdam, near Berlin. ‘When the Phoenix team came looking I flew straight to Puerto Portals in 2018 to see what they were doing… Straightaway I said, “Hey, I can see why this sucks, let me see how I can do it better,”’ grins the young German.

‘First of all we did a video player targeted at visual debriefing. You load all the separate media streams that you have, drone footage, onboard GoPros and video, plus photos from the coach boat – then it is all about lining it up on a common timeline so you can get it all synced nicely, also with the log file for the day.

‘The core of this app initially was to get it all done quickly, so the coach would not have to do too much work before being able to debrief. From hitting the dock to walking to the hotel to debrief at, say, seven. That was what we did first.

‘Team Phoenix used and liked the first prototypes. But there was much more to do with the data, overlaying numbers and reports. Plus many other improvements were possible with regard to the existing systems, mostly in terms of speed. PDF files from log reports had an awful lot of good info but it took a long time to get it all into a usable report.’

So after the video player app Njord built the current web-based analytics platform, where the teams now upload their log files and, after a bit of editing to cut to the key periods, they have their reports – of a similar quality – within four or five minutes, with a link that can be sent back to the team.

‘I think what we have now is unique in terms of the short timeframe and it being a web-based app. We tried to take the path of making it simple. It may not be as powerful as some other packages but the timeframe is much shorter, which makes it super-friendly for crews trying to move forward as fast as possible in the limited time they have available,’ says Witt.

‘We saw some good results in Cape Town. A few of the teams have had some capability to transmit via wi fi to their chase boat, reproducing the data on the yacht dashboard on the coach boat. But the range is limited and when the coach boat goes off to the top mark there is no longer a data link, so instead we built something that goes over 4G.

‘We can also now combine the data so that when Quantum and Platoon or the two Phoenix boats are training together we can share the data and one coach will have the data for both boats. Then you have a very instructive direct comparison.’

So as of this season in the TP52 Super Series fleet the two Phoenixes, Quantum, Platoon and Provezza are using this tool. Alegre are using the video debriefing and Bronenosec are currently trialling the app. Other events or classes where the latest Sailnjord software is making inroads are the Maxi72s, 44 Cup and the America’s Cup. Usage by national teams in the Olympic classes is also picking up and this is now another area of focus.

Cape Town also represented the first chance to move the 52 Super Series’ sustainability projects, collaborating with partners 11th Hour, onto the next level for the new season. Support from the Plattner family’s Odzala Discovery Camps gave cause to highlight the work they do preserving one of the very last truly intact biodiverse regions of our planet, the Congo. The natural forests there are critical to managing global warming and other threats. Odzala Discovery Camps take an innovative approach to pioneering this ecotourism in the Republic of Congo working with local communities.

Just before the regatta started Ergin Imre’s wife Nazli invited around 20 kids from the Skipper Foundation in Mossel Bay to visit Team Provezza and the 52 Super Series. The Congolese kids got up in the middle of the night, because they had to drive 450km, then after a welcome and much needed refreshments they did a tour of the team compounds and hopped on Provezza’s TP52 for a look around.

Provezza also chartered a small tourist boat for the occasion and the kids then spent three hours with the team on the water to see the TP52s in action. A key objective of the day was to try to demonstrate to the students that to work in the sailing industry you don’t have to be a sailor, there are lots of ancillary occupations and skillsets without needing to be a top pro sailor. I’m pretty sure they left inspired, smiling… and exhausted.

Pioneered at Puerto Portals, Mallorca last year ,the programme to redistribute unused food also proved a popular success in Cape Town, where we partnered with distributors Food Forward and The Ark charity in Cape Town, establishing a food leftover collection from the teams, the 52 Super Series staff and caterers. In total, we collected 93kg of food during the six days which went towards feeding 120 local people. The food was collected by volunteers from The Ark before being distributed to those in need.

Plans also remain in place to support the Little Optimist Sailing Academy. That was to be one focus during the second Cape Town event, the Rolex TP52 World Championships, which had to be postponed. The academy is based at the Zeekoevlei Yacht Club, Cape Town, where they have 32 Optimists as well as other dinghies all employed offering disadvantaged youngsters the chance to get afloat. The academy’s Sailing Therapy experiences and programmes play a valuable role in helping local children compromised by health, poverty or other factors to overcome social adversity and hopefully connect a little more with the ocean on their doorstep.
Andi Robertson