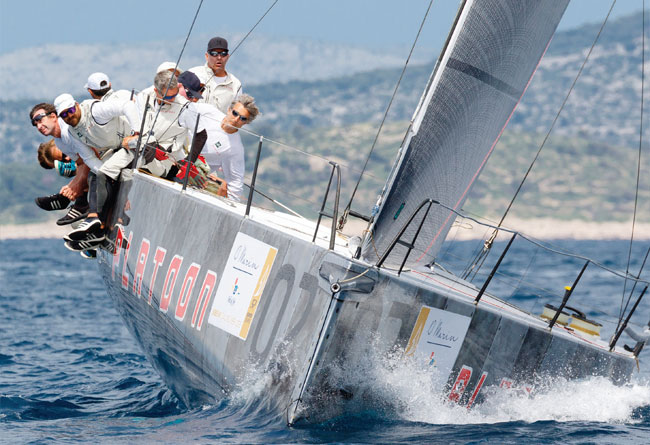 TP52 (and Maxi 72) class manager Rob Weiland takes a breathless look back over what has proved to be the hardest fought 52 Super Series ever.

At first sight a comfortable win for Quantum Racing but, boy, did they focus and work hard to realise this one. How hard again came to the surface at the Super Series prizegiving. As he was after winning the Rolex TP52 Worlds in Cascais, Terry Hutchinson when ‘speeching’ clearly was emotional. This man not only puts pressure on his team. From now his focus will be on the American Magic America’s Cup effort – it will be interesting to see who is going to replace him on Quantum for 2019…

Luna Rossa marked its farewell from 52 Super Series with a narrow win of the final 2018 event in Valencia – 1pt ahead of Quantum with Platoon another single point astern in 3rd. There was nothing in it between these three, if anything the regatta showed Platoon had a small edge in the light conditions.

The final day of racing with three windward/leeward courses saw Quantum dealing best with the mental pressure and both Luna Rossa and Platoon a bit shaky. Meanwhile, others were clearly enjoying the day, like Sled (5,3,1) or Phoenix (2,2, oops 11).

Azzurra put herself on the Valencia stage that day (8,1,9) but handed 2nd overall for the year to Platoon, whose owner Harm Müller Spreer for the second year in a row is crowned best owner/driver over Takashi Okura in 2nd (Sled, 5th in the overall standings) and Andy Soriano 3rd (Alegre, 6th overall).

Will 2019 see Harm in the only spot that counts for him? I am quite sure in 2019 it will be closer in points for the top five or six boats and impossible to predict the outcome.

At the TP52 annual meeting, held in Valencia, the class members discussed the future, as in how, when and where to sail from 2020 onwards. The 2019 Super Series is already announced. It is good to hear each other instead of guessing about opinions, but it has risks as the more introvert are easily less ‘heard’ than the more extrovert. As well as that today’s opinion is not always tomorrow’s.

There are clear trends, however. Over the years one of them is that a majority of owners prefer racing in the 52 Super Series because it is an open competition, so no restrictions like owner/driver or on pro crew.

I am always a little puzzled that this is supported so wholeheartedly as I also see owner-drivers at times struggle as a result of it. Then again I understand and sympathise more when I am at ownerdriver or restricted (pro) crew events and hear the debates and accusations of owners being helped during manoeuvres, or when I see the ‘best amateur crew money can buy’ teamed up with pro sailors.

I have first-hand experience of the owner-driver concept in the Maxi72 class. If I try to imagine whether the balance of owner-driver rules and controls of that class would work in the 52 Super Series I can only comment that ‘it would not!’

It would be a complete nightmare to police at the (near zero) tolerance level that competitors expect from Super Series. But the members of the Maxi72 class are equally adamant that the ownerdriver rule is why they prefer that class over other options, while the members of the TP52 class are of the opposite persuasion. I love them both.

When and where to sail is a harder nut to crack. In order of importance the TP52 owners place sailing conditions first, then location quality and in third the economics of it all. Over the years a fourth condition has surfaced: the wish to avoid as much as possible sailing in the summer months of July and August.

All in all this presents a puzzle that is impossible to resolve if limiting activity to the traditional racing period of May-September for five events in the Med. Even with April and October added, at quite some risks to number 1, ‘sailing conditions’, it makes for difficult planning once we restrict ourselves to the Mediterranean.

This tighter geography is in contrast with the Maxi72 owners, who seem to live on a smaller planet, as they transport their boats substantially more and further. Their three criteria can best be described as location, location, location. Possibly also because the draft of their boats (5.4m) limits their choices more than in the case of the TP52 (3.5m) they generally need less discussion to nail down their favourite locations and races.

Sol I look forward to 2019 as if 40 years younger and asked to do the bow on a TP52. No finer mix of conditions for 52 Super Series racing than can be expected from Mahón, Puerto Sherry, Cascais, Puerto Portals and Porto Cervo.

For the Rolex TP52 Worlds in Puerto Portals, the only event with light to medium sea breeze conditions of the five, how to optimise for that one? Expect 10+ teams again for 2019. Some new teams to join the fray, possibly even new boats. Again it will be a battle till the final race day of the year.

Visit us if you can. One true fan this year came all the way from Japan and to her surprise was invited on the photographers’ RIB for a couple of days to watch the racing.

It is so simple to make people happy. Sometimes…