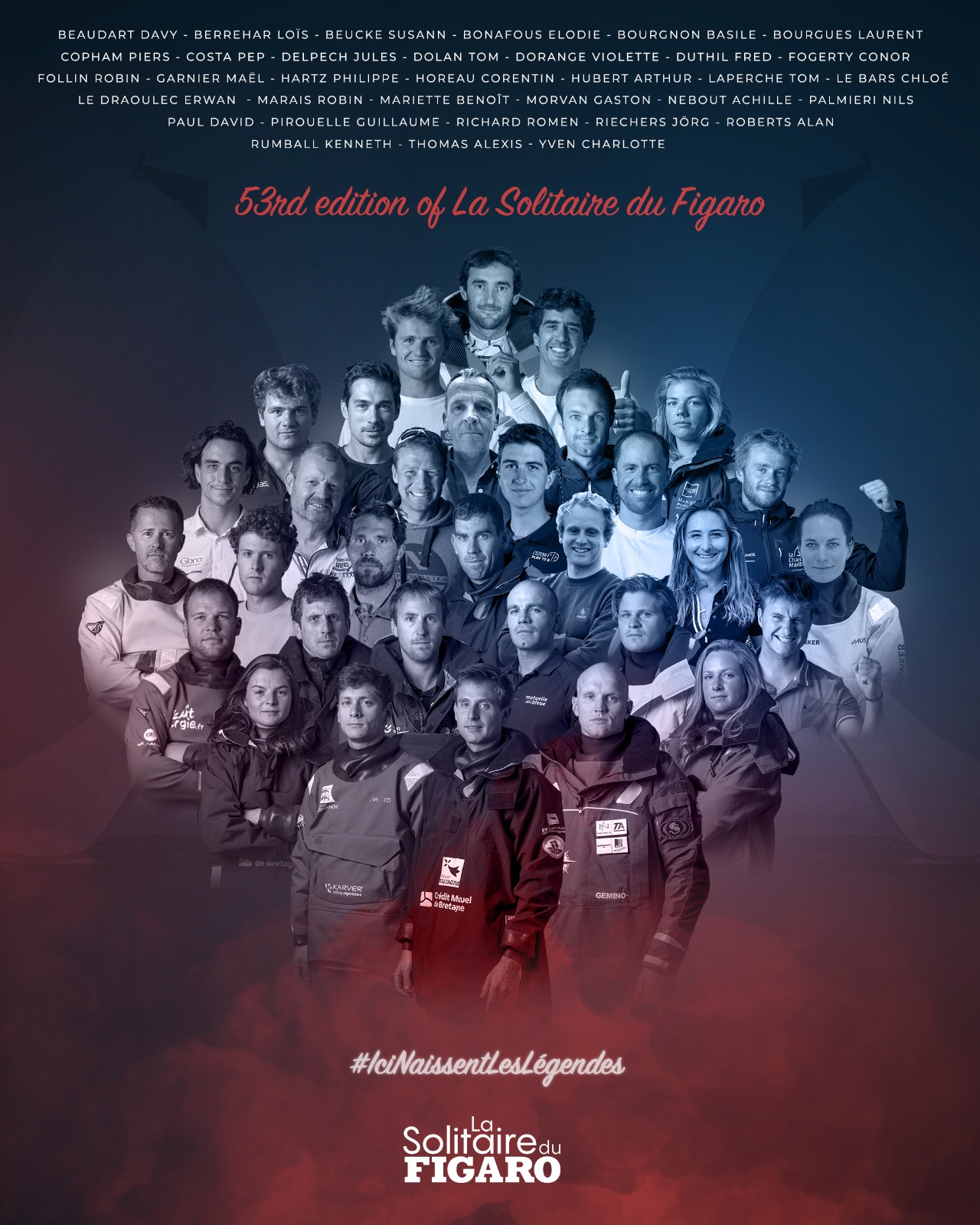 The starting gun for the first stage of the 53rd edition of La Solitaire du Figaro will sound on August 21, off Saint-Michel-Chef-Chef in the Loire-Atlantique after the fleet has paraded up the Loire from Nantes.

And this year’s edition promises to be every bit as tough and challenging as usual. The three stage course will cover an aggregate 2000 nautical miles (3700kms) with 34 solo skippers set to take on the annual multi stage solo race. The field includes five women and nine rookies.

Over the years the event has remained the proving ground for emerging solo racers, the very top competitors often going on to success on the Vendée Globe, the demanding solo non stop race around the world.

Since 2019 it has been raced on the Figaro Beneteau 3, a 36ft foil assisted one design which means that the sailors compete on equal terms. It is the yearly pinnacle event on the Figaro circuit as well as the highlight of the French Elite Offshore Racing Championship.

This year’s course comprises three long, tough stages all more than 635 miles in length. Starting from Nantes the stages stop in Royan and Port La -Forêt before finishing in Saint Nazaire. The focus is very much on the start port of Nantes and the finish into Saint Nazaire, key cities in the Loire-Atlantique region which is a Major Partner of the race, complementing new main partner Paprec.

The Grand Depart takes place in Nantes on the 21st August and the finish, the Grand Final is some three weeks later in Saint Nazaire. Both the start and finish cities will offer popular exhibitions and festivals for visitors to enjoy in the respective race villages. 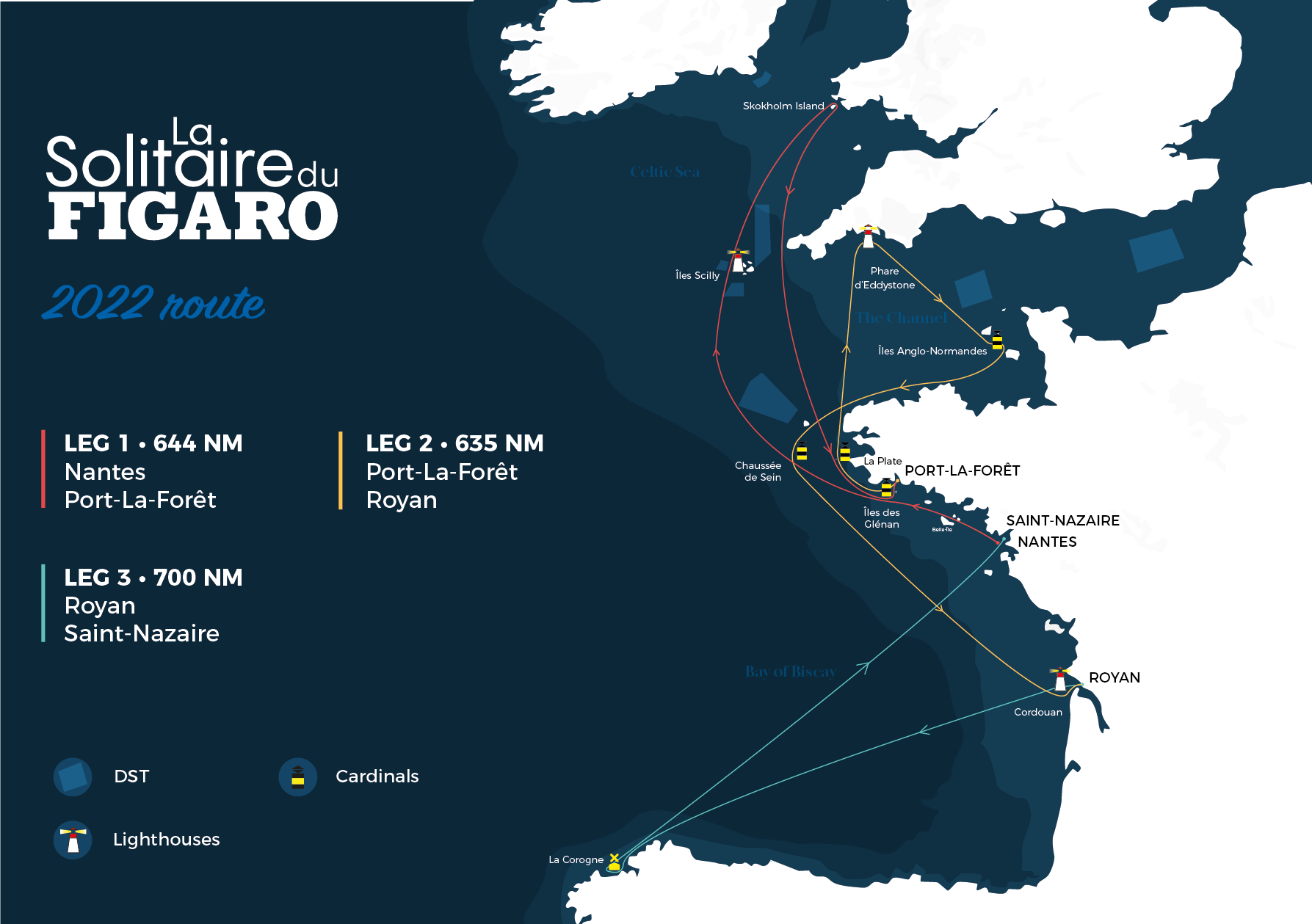 The 2022 course is summarised by Yann Chateau the new race director of La Solitaire du Figaro, who will be assisted this year by Pierre Hays, deputy race director:

“La Solitaire du Figaro 2022 takes place in 3 stages in a format that will be hard on the bodies and minds of the sailors. Typically each will start on the Sunday for a theoretical finish of the boats on the following Thursday morning, And so the solo racers on this 53rd edition of the Solitaire will compete over long legs of four consecutive nights at sea.

“Success on this race is also always about the ability to recover between stages. They then will only have three nights ashore to sleep and prepare the boat before attacking the next stage. And so this Solitaire du Figaro is fully worthy of its reputation as hard, committed, challenging and very technical.

“The first stage will begin with a parade in the Loire on Saturday August 20 before a start the next day in the bay of Saint Michel-Chef-Chef. Stage 1 races from Nantes to Port-la-Forêt via Skokholm Island, a small island in the SW tip of Wales. This 644 miles long leg passes Lands End and the tip of Brittany returning to finish in Port La Forêt.

“The second stage of 635 miles is more of a Channel leg from Port La Forêt to Eddystone off Cornwall and the Channel Islands before a Biscay finale across the legendary Bay to La Coruna back to finish in Saint Nazaire, more than 700 miles.”

Something new this race is the integration on each stage of an intermediate sprint, a passage of a previously defined course mark (indicated in the notice of race). The first competitors to cross this mark will receive a time bonus towards general classification (5 minutes for the first / 3 minutes for the second / 1 minute for the third). This will be an opportunity to increase the stakes around these crossing points and to increase the tactical risk taking during the last miles into these sprint marks. skipper, the last mile option.

A look at the Rookies and Internationals

The rookies who will participate for the first time in their sporting career in La Solitaire du Figaro are preparing to do battle up against some of the race’s biggest and most successful racers such as Fred Duthil who has 12 participations on the clock.

Typically the pathway to success on La Solitaire du Figaro usually sees podium positions on the stages progressively become overall podiums on the General Classification. A win in the Bizuth or Rookie division is often not just the first sign of an emerging talent but it often is a passport to further sponsorship or commercial funding for the future. Among those who have been top rookies in the past are François Gabart in 2008 just four years before he went on to win the Vendée Globe at his first attempt.

Among the new talents, rookies on this edition are Basile BOURGNON, (EDENRED), who is making a promising start to the 2022 season in Figaro (winner of the Drheam-Cup with Robin Follin, 2nd in the Solo rookie ranking on the Maitre CoQ, 5th at the end of the BPGO Trophy – On the Route des Îles du Ponant 2022 (with Yann Eliès), 1st Rookie, of the Le Havre Allmer Cup.) One of BOURGNON’s main rivals will be Chloé LE BARS (Région Bretagne-CMB Océane) who has already signed a 1st rookie place on the Solo Maître Coq.

Guillaume PIROUELLE (Région Normandie), selected to join the “Skipper Normandie” system over three seasons in Figaro Bénéteau 3 has an impressive CV in the 470 and in youth sailing, He has a Youth World Champion title in 470, 2 World Vice-Champion titles in 420 and several European Champion titles in 420 and 470. He raced the Diam24 on several Tour Voile (formerly Tour de France à la Voile) including two podiums and a victory in 2019. Last year PIROUELLE worked alongside Alexis Loison co-skipper on the two handed races but this year it is his turn to be alone aboard the Figaro Région Normandie. Also present will be Davy BEAUDART (Nauty’mor), a yard manager and skipper, who is already well known in the world of offshore racing, often co-skipper of choice of Louis Burton. He has 12 victories in the Mini 6.50 Class between 2001 and 2018.

Laurent BOURGUÈS (#Become a Partner),is well known as a preparateur and technician working with the likes of Yvan Bourgnon, Yves Le Blevec, Tanguy de Lamotte, Thomas Ruyant. He sets out on La Solitaire du Figaro for the first time. He will be one of the rookies to follow, as will Romen RICHARD (PASSION SANTE / TRANS-FORME), twice runner up as Youth National Champion and French representative at the 2014 Youth Olympic Games in China.

Among the International rookies are Scotland’s Piers COPHAM (Voiles des Anges), or the German Susann BEUCKE (This race is female) a silver medalist in the 49er FX in 2020 at the Tokyo Olympics, a double European champion and numerous times in the top 5 of the World Championship. Then there is Irish skipper, Conor FOGERTY (immunex365.co.uk)

In general the Figaro racers are getting younger but this race sees the return of some ‘old hands’ like Jörg RIECHERS (Alva Yachts), who last took part in 2005. The German skipper, 2nd in the mini transat in 2017, 3rd in the Normandy Channel Race in class 40 two years later and 6th in the Transat Jacques Vabre has a new IMOCA in build for the next Vendée Globe and sees his return to La Solitaire du Figaro as a good way to sharpen up his racing skills this summer.

Among the top International skippers who are back to try and improve on their career best results are Briton Alan ROBERTS (Seacat Services) who will start his ninth La Solitaire du Figaro looking to better his ninth overall in 2015 and 10th in 2020. Tom DOLAN (Smurfit Kappa – Kingspan) cut his teeth in Mini 6.50 before joining the Figaro Bénéteau circuit.

After just three editions DOLAN scored a fifth overall, the best non French result for more than 20 years. Both ROBERTS and DOLAN have realistic hopes of finishing on the overall podium this season. Both are recent holders of the VIVI Trophy for the top non-French finisher on the overall General Classification.