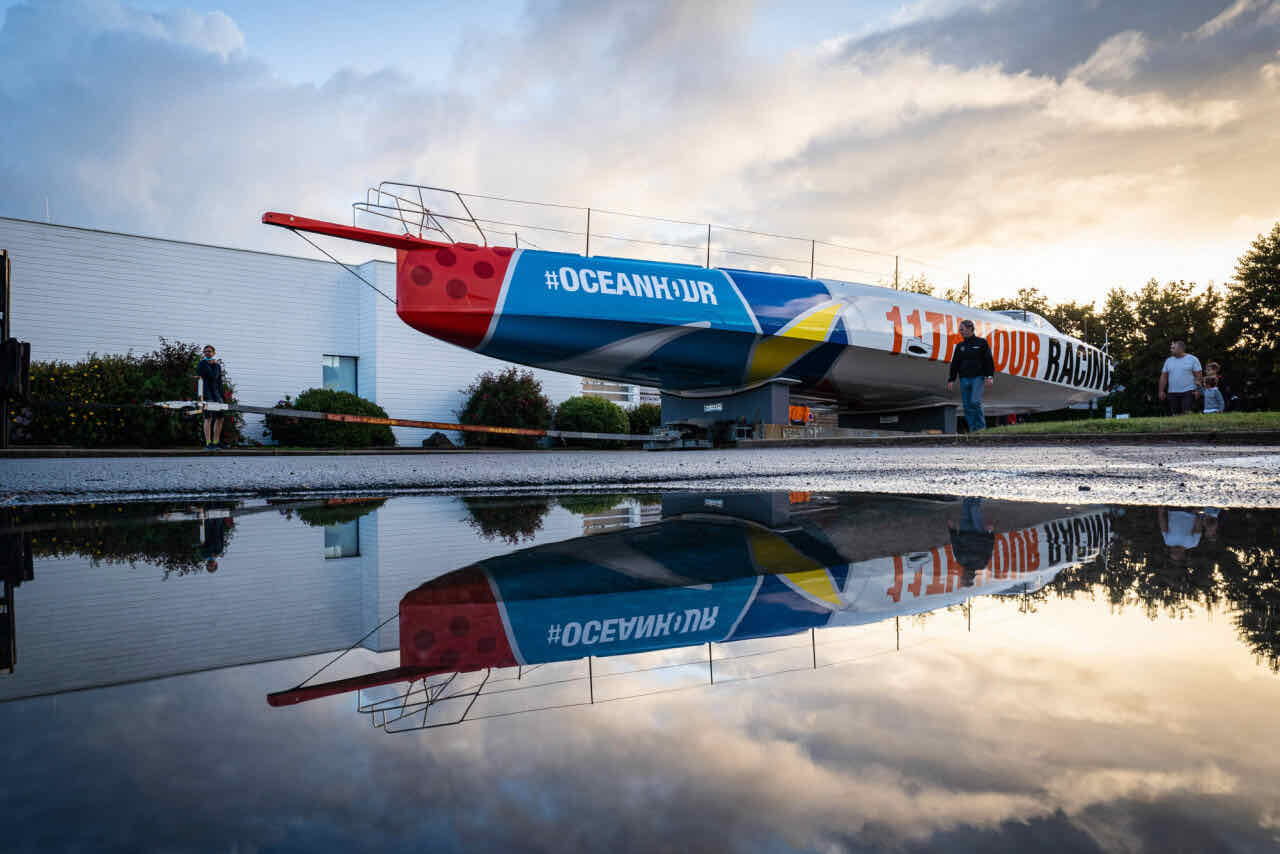 Ed Gorman reports on the 11th Hour Racing Team’s newly revealed brand spanking new IMOCA 60 which emerged from the shed at CDK Technologies in Port-la-Fôret, France over the weekend.

The arrival of any new IMOCA is a moment the class looks forward to as the design game takes its next step in the era of foiling monohulls, but the new 11th Hour Racing IMOCA is of particular interest.

That’s because the Guillaume Verdier-designed flying machine that will be skippered by Charlie Enright and Pascal Bidégorry in the Transat Jacques Vabre, is the first IMOCA to have been built with fully-crewed racing in mind.

The 11th Hour Racing Team has its sights firmly set on The Ocean Race in 2022 and the brief for the design team, led by Verdier and Hervé Penfornis, was to produce a boat that could be pushed hard 24/7 by a crew of four or five and one that will be suited to the stop-start nature of The Ocean Race format.

Enright can’t wait to get going on sailing trials in the multi-coloured new IMOCA which rolled out of the shed at CDK Technologies in Port-la-Fôret for the first time at the weekend. The American veteran of two Ocean Races quipped that his new boat looks like the Batmobile from the Batman movie franchise and you can see what he means.

Indeed the first impression is of a hull with a super-slick aero treatment that follows on from the old VPLP-Verdier HUGO BOSS (now named 11th Hour Racing), with a scow-type profile to its bow (in a similar vein to the first Sam Manuard IMOCA, the former L’Occitane en Provence), a pronounced chine, and with a large and almost completely enclosed cockpit with minimal side decks.

The first photos do not show how the cockpit is laid out, what the foils will look like or what the boat looks like down below, where many of the significant design advances have been made to accommodate a full crew.

“Hopefully the hull shape is an evolution of the good work Guillaume has already done,” summarised Enright. “I think we will see a foil package that is pretty radical and different to a lot of other boats out there today.”

“I hope we’ve got the big things right – hull shape, foils, aero package – all that,” he added. “The detail, as it relates to the fully crewed stuff, are pretty unproven. The cockpit volume, the cockpit layout, the crew mechanics and ergonomics certainly played a big part in it.”

The goal was to produce an IMOCA that can be competitive in a range of conditions. “We were not designing the boat for the Vendée Globe, so we have tried to make it an all-round boat basically,” continued Enright. “You only have to start and finish the Vendée once each race, whereas throughout the course of an Ocean Race you have 10 starts and 10 finishes.”

Verdier, who also name-checked Veronique Soulé, Romain Garo, Morgane Schlumberger, Loic Goepfert and Jeremy Palmer as key members of the team that produced this boat, spoke in a similar vein. “We always try to keep the maximum waterline length,” he told the IMOCA Class, “to be good in transitions, in light winds and reaching as well. And we wanted at the same time a boat that keeps its nose out of the water when you dig in – we always want two-in-one!

“A lot of that is really a question of having the right centre of gravity and having, of course, the dynamic lift in the bow,” he added. “With this boat you will see a new kind of bow shape, not only in section shape but very different to what has been done in the past.” 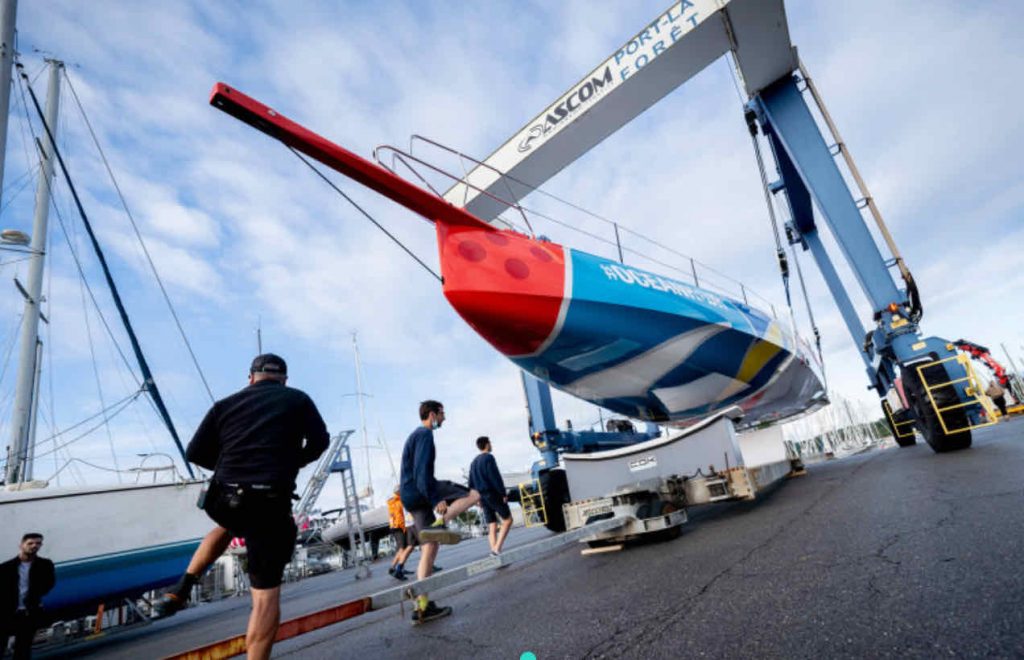 Enright said the foil package included the ability to draw the foils in when not required so that, when the hull is upright, they are clear of the water. “There are some boats that are still dragging part of their foils in the water when fully retracted at zero degrees of heel,” he said. “It was important to us that this was not the case, but we can’t get rid of the whole things.”

The cockpit layout and the layout down below has been designed to allow a full crew to work together during manoeuvres with enough space to do so efficiently. Verdier says the boat, which features more winches than recent IMOCAs, feels far more spacious than all other boats in the class.

“It is not hugely different,” he said. “But there is a little more functionality. There are more winches and a bit more room – you will be surprised how spacious it is. It looks like a big boat when you are inside and it feels like a much bigger boat than the other IMOCAs.”

Enright echoes this: “We have made it so a group of people can work independently throughout the boat during a manoeuvre,” he said. “When we have all hands on deck with four or five people on board, there is enough space for those people to operate and do their job.”

The American sailor also mentioned the extra structure you see down below. This reflects the mission to build a hull that can be pushed harder than IMOCAs might normally be sailed in solo configuration. This boat has extra structure in the slamming area and has been built to survive being driven full-pelt in the toughest of conditions.

Another area where the boat is different is in the stacking system, something Enright remarked on. The design seems to have thought-through ways to make moving dead weight around easier. “We have also emphasised the stacking system,” he said, “the ability to move weight, not only left and right but fore and aft.”

Talking to both Enright and Verdier, you sense a huge amount of work has gone into this project. Take, for example, the sail wardrobe, where the team has carried out detailed work on sail crossovers, sail weight and sail structures. The net effect, they hope, is a boat that proves hard to match, whether raced fully-crewed or short-handed.

Enright is hoping the new 11th Hour Racing IMOCA is only the first of a new generation of boats built for full-crewed racing that should also be competitive when raced two-handed or even solo. “Hopefully this kicks it off and there are more to come,” he said.

“Something we could do is sail this boat competitively this year and beyond to prove that it’s not a compromise. Once we start lining up in more crewed configuration, I think we’ll be happy with the decisions that we’ve made. Although there were only five entries in the Ocean Race Europe, I think everybody that did it loved it and, if they could do more, they would. The numbers weren’t strong initially but you have got to start somewhere and if you talk to anyone who went through it, it was all positive.”

Verdier also emphasises the versatility of this boat. “I hope there will be more (like it),” he said. “It’s a smart way to go. I hope it will open the door to the Ocean Race. It’s smart because if you use it single-handed, you just remove a winch or two, some hydraulics or whatever and you remove a bit of weight and on you go…you’ve got nearly as strong a boat and you’ve got more space.”

This project was infused from the beginning with the 11th Hour Racing commitment to sustainability, leading edge environmentally friendly practices and adherence to the IMOCA Class’s new set of Sustainable Class Rules. This was implemented by a working group set up to oversee the design and build process.

Among initiatives taken were a carbon off-set programme; the commissioning of alternative material reviews and bio-composite tests; a calculation of the life cycle assessment of the build to identify impact hotspots; a boatyard sustainability audit to highlight manufacturing inefficiencies and ways to save on waste, energy and water use; the use of packaging take-back schemes, and the designing of moulds and mock-ups with deconstruction in mind.

The team also investigated alternative materials, employing a bio-mimicry approach to aspects of the design, which included trialing flax and leaf vein structures for applications like deck panels, hatches and pad-eyes.

Amy Munro, the 11th Hour Racing Sustainability Officer, highlighted the team’s new “toolbox” programme which helps other companies and teams benefit from the steps taken by 11th Hour Racing with a series of how-to guides. “For us it is about showing what can be done and trying to pave the way and make it easier for others to follow suit,” she said.