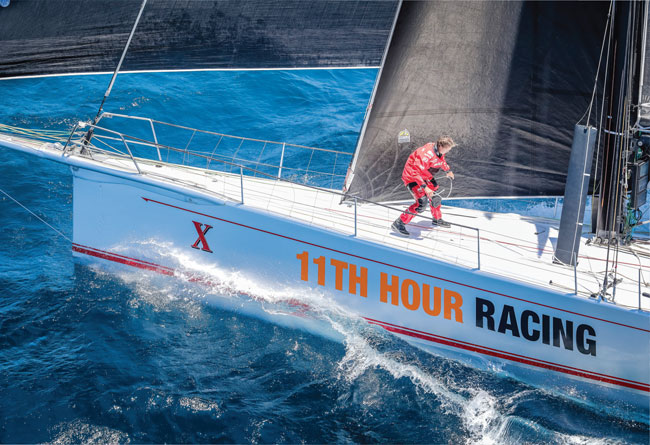 With the benefit of sophisticated external auditing 11th Hour Racing are now in a position to judge each of their multiple projects on their individual merit and tweak their support – and advice – accordingly.

11th Hour Racing is on a mission to empower the sailing communities and industry to take an active role to uncover and utilise solutions to the urgent crisis facing the health of our oceans. They’ve undoubtedly had some great successes over the last decade supporting, funding and helping to shape more than 100 projects around the world through a programme of sponsorships, grants and ambassadors. But they’re often asked by members of the sailing public: ‘How do you measure the success of what you do?’

It’s a fair question. It’s relatively easy for a commercial organisation to measure return on investment (ROI) from sponsorships – you just look at how they affect the bottom line – but how do you measure the ROI of a sustainability sponsorship, whose goal is to effect positive change in people’s opinions and behaviour rather than simply to make money?

‘We needed to measure in a meaningful way how our engagement with the public and our involvement in major sailing events, such as the America’s Cup and the Volvo Ocean Race, has changed the sailing community’s attitudes and behaviours around ocean health and sustainability,’ says Michelle Carnevale, programme director from 11th Hour Racing.

The team asked Performance Research, a leading US specialist in sponsorship evaluation, to design and conduct the research and to analyse its findings. Several key questions informed the study. First, how has the sailing community’s perception of ocean health changed during the last few years? Second, has the behaviour of sailors become more sustainable? And to what extent has 11th Hour Racing influenced these changes?

Main picture: sponsorship from 11th Hour Racing helped the Australian skipper Stacey Jackson to assemble a stellar team of professional female sailors to compete in the 2018 Rolex Sydney Hobart race aboard Wild Oats X (loaned by the Oatley family). They finished in second place overall, won the Jane Tate Trophy and all while offsetting their carbon footprint. They gave sustainability talks to yacht clubs, hosted school visits, greatly reduced their use of plastic and consumption of meat and helped scientists by taking water samples for microplastic testing

‘They came to us with a unique perspective,’ says Jed Pearsall, president of Performance Research. ‘They were asking does our sponsorship model actually work, how are we changing the behaviour of our target group, are we in the right space, and what is the level of support for our mission? So we compared the changes in perception and behaviour of people who had been exposed to 11th Hour Racing’s messages with people who had not.’

Performance Research conducted an online survey in 2018, which was supported by Seahorse and various sailing organisations. More than 2,000 people participated including active sailors, former sailors and nonsailors who follow the sport of sailing. Some 55 percent of respondents were from the United States and the remaining 45 percent from other countries, including many from the UK. A separate sample of 500 people with no reported interest in sailing were also polled and their responses were used for comparisons.

The results were very positive. 11th Hour Racing’s sponsorship of teams and regattas does seem to have significantly increased sailors’ concerns about the health of the oceans. Pearsall says it works because these sponsorships are a very effective way to get leaders of the sailing community talking about sustainability and ocean health – and the sailing public listens to them.

In fact, the study found that the sustainability sponsorship model pioneered by 11th Hour Racing has done more than raise awareness. The organisation’s involvement in sailing events has also helped to change people’s behaviour in ways that benefit the environment. Sailors are more likely, for example, to avoid single-use plastic and to take various other steps to reduce pollution. An overwhelming majority of 86 percent are now highly concerned with ocean health, up from just 56 percent three years ago. And seven in 10 sailors say there is a strong connection between their interest in sailing and their concerns about the health of oceans, lakes and waterways.

‘I could spend hours with anecdotal examples of how our work has inspired change. But now we need to distil out the facts and details. Taken together, these findings provide justification for our theory of change,’ says 11th Hour Racing’s CEO and co-founder Jeremy Pochman. ‘Sailors witness that pollution is getting worse, and the emotional connection to their sport is a viable way of inspiring them to take action.’

Overall, respondents were more likely to report a belief that pollution in the bodies of water where they sail is getting worse rather than better. ‘This highlights the importance of our partners, grantees and ambassadors weaving the story of ocean health into the fabric of their event, practices and messaging. It presents an opportunity for us to further connect with sailors, and their communities, about how to remedy these issues,’ Pochman says.

Indeed, the study found that firsthand experience of pollution was the most powerful factor that inspires sailors to be more environmentally conscientious. News stories and films about ocean health threats were also found to be powerfully persuasive – more so than seeing professional sailors and grand prix regattas leading by example and becoming more sustainable.

The researchers also found an important link between sailors’ familiarity with individual ocean health issues and their perceptions of urgency. Campaigns by 11th Hour Racing and others have very successfully highlighted some issues, such as plastic debris and litter in the oceans, and these are widely seen as the most urgent. Sailors perceive other issues that are arguably equally important, such as ocean acidification, to be less urgent because they understand less about them. This allows 11th Hour Racing to fine-tune their programmatic strategy as well as their communications and outreach.

One of the most encouraging findings is that many sailors say they actively influence other people and encourage them to behave in a more sustainable way. ‘The message is getting out,’ Pearsall says, ‘and there is an increasing sense of urgency. The big challenge now is to maintain momentum and ensure that people don’t get complacent again.’ He says there is also a danger that people will focus on relatively small issues, like avoiding plastic drinking straws, while losing sight of the bigger issues such as reducing all kinds of plastic waste on a global level and making the connection between plastic, fossil fuels and climate change.

Sailors’ perceptions and attitudes are changing for the better, but there is much work to be done to turn their concerns into actions. Pearsall says he was surprised that so many sailors seemed very receptive to 11th Hour Racing’s core messages about the urgent need to improve ocean health and embrace sustainability, yet admitted that they had not actually done much themselves in response to these concerns. ‘It’s very hard to change behaviour,’ he says. ‘People continue to use cleaning products and bottom paint that they know can’t be good for the environment.’ Indeed, it seems that shockingly few sailors use eco-friendly antifoul or spill-proof fueling techniques, or consider the environment when using their anchor.

Pearsall says boatyards and marinas have an important role to play in making sailing more sustainable: ‘As we found in our work for Unilever, if you make a real effort people will follow.’ It’s encouraging to note that 52 percent of sailors have noticed an increase in sustainability efforts at their boatyard or marina in the last three years, while 56 percent have seen improvements at their yacht club and 64 percent at their local community sailing centre.

Whilst the study proved that 11th Hour Racing’s sustainability sponsorship model is working well and delivering real, tangible results, it also revealed that most sailors think the most effective way to make positive changes happen is through grassroots initiatives, working with local sailing centres and regattas. Pearsall agrees but cautions that the grassroots approach is a lot more difficult to manage than sponsoring major events. ‘It’s much easier to spend the big money than the small money,’ he says. ‘You have to find a happy medium.’

The research has already informed 11th Hour Racing’s latest round of grants, most of which are focused on grassroots initiatives that combine sailing with marine habitat restoration, public education programmes and active marine stewardship. ‘The data provided by this third party evaluation has been a powerful tool to broaden and deepen our impact. For example, we decided we needed to empower more of our ambassadors as changemakers in their communities and through our grant programme we now offer them the opportunity to work with a nonprofit organisation of their choice, focusing on specific ocean health projects. By focusing on our people we can really accelerate change,” concludes Carnevale.