Skip to content
You are here
Home > Advertorial > 11th Hour Racing: Going back to grassroots 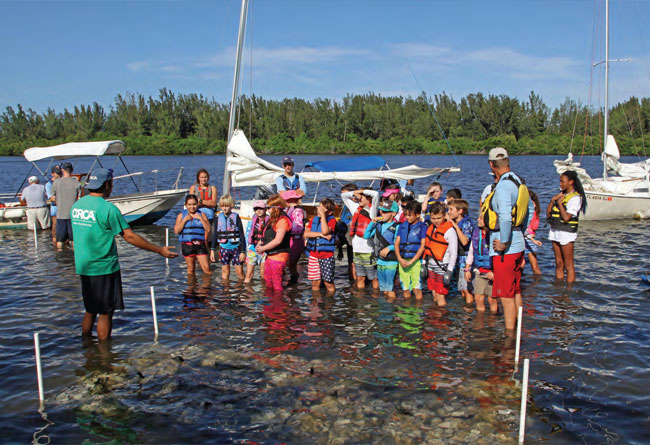 11th Hour Racing’s pro-sailing ambassadors are partnering with a variety of marine conservation groups – and already with impressive results.

‘Think global, act local’ is the simple philosophy that underpins many effective campaigns. And it’s at the heart of one of 11th Hour Racing’s recent initiatives, which funds collaborative projects between its own high-profile ambassadors – top-level marine industry professionals who care deeply about ocean health – and grassroots marine conservation groups.

Last year, 11th Hour Racing’s ambassadors were all tasked with finding a grassroots organisation that deserved a $10,000 grant and working with them on a worthwhile project. ‘They encouraged us – in a good way – to go out and find new grantees to work with,’ says Tom Burnham, pro sailor and coach. ‘We weren’t allowed to just go back to the same old well.’

11th Hour Racing’s grant programme director, Michelle Carnevale, put Burnham in touch with the Youth Sailing Foundation (YSF) of Indian River County in Florida. ‘It was a perfect fit,’ he says. ‘One of their founders is George Hinman, the America’s Cup sailor, past commodore of the New York Yacht Club and an old family friend of mine. If he was involved, I knew they had to be doing great things.’

Indeed they were. The Indian River Lagoon, a 150-mile long waterway that runs alongside the Atlantic coast of Florida, is one of the most biodiverse estuaries in the northern hemisphere with more than 4,300 species of plants and animals. By not only teaching local children the importance of looking after it, but also giving them regular opportunities to enjoy it, YSF is creating a new generation of local environmental stewards.

‘It’s so much more than a sailing centre,’ Burnham explains. ‘As well as giving under-served children free sailing lessons and teaching them about ecology and sustainability, they’re restoring the mangroves of the Indian River, using shells to build barrier reefs to protect them from erosion caused by powerboat wakes.’

Further down the Florida coast, another 11th Hour Racing ambassador has also been helping to restore mangroves. ‘I’m involved with a local group called Debris Free Oceans here in Miami,’ says US Olympic 49er helm Stephanie Roble. ‘People think of mangroves as this beautiful pristine environment but once you get in them, you realise there is just so much trash there: bits of styrofoam, straws, bottle caps… we need to raise awareness that there is a problem.’

A growing awareness of plastic pollution led Roble to become an 11th Hour Racing ambassador. ‘About five years ago I was doing a lot of professional sailing in small keelboats and I noticed that almost everywhere we raced there was plastic pollution and I began to realise what a big problem this is,’ she explains. ‘I grew up sailing on a beautiful small lake in Wisconsin, which doesn’t have any pollution; I wish all places could be like that. As I spent more time sailing on the ocean, it became obvious to me that the problem is huge and I need to do my part.’

Meanwhile, on the Gulf Coast of Texas, 11th Hour Racing ambassador Elizabeth Kratzig is focused on a specific type of plastic pollution: nurdles. These tiny pellets are the raw materials used to make nearly all plastic products. Billions of them escape due to sloppy methods at manufacturing sites and during transportation, and they end up in our waterways and on our shores.

In fact so many get lost in transit that nurdles are the second-largest direct source of marine microplastic pollution in the world, after the dust from car tyres. About 250,000 tons of them get into our oceans every year – and many of these are entering the food chain. Sea turtles, whooping cranes and fish have been found starved to death with their bellies full of nurdles. The pellets become porous over time and can absorb high levels of contaminants, E.coli bacteria and toxins, which scientists are concerned could pass up the food chain to humans.

‘I’m focusing on nurdles because they’re the most easily controllable form of plastic pollution,’ Kratzig says. ‘Nearly all the billions of nurdles that end up in our coastal waters escape during transfer. And in the US, there is no strong legislation.’

Nurdles are easy to distinguish from other microplastics, Kratzig says, and her grant is funding Nurdle Patrol, run by the Mission-Aransas National Estuarine Research Reserve, which tracks and maps the distribution of nurdles around the Gulf of Mexico. It’s a citizen science project that relies on members of the public spending 10 minutes counting nurdles when they go to the beach and then emailing or uploading the count to the Nurdlepatrol.org website.

Thus far, the record is a shocking 30,846 nurdles collected by one person in just 10 minutes in Galveston Bay. By comparing nurdle counts sent in by thousands of people, from hundreds of locations, marine biologists at Mission-Aransas can gauge the severity of pollution and map the data to create a picture of the overall problem.

Nurdle pollution is almost everywhere, unfortunately, but for Kratzig it is particularly close to home: one of the biggest producers, Formosa Plastics, has a huge factory right next to her family’s ranch and an estimated 75 billion nurdles have found their way into the adjoining creek. A recent lawsuit against the company brought by Texas residents used Nurdle Patrol data as evidence of Clean Water Act violations and successfully proved the company had polluted Texas waterways with its nurdles. Formosa Plastics agreed to pay a $50 million settlement and change its practices to help prevent future spills.

Huge concentrations of nurdles are often found near factories that produce or use them. By mapping their distribution and highlighting the places with the highest concentrations, Nurdle Patrol is gathering evidence that can help identify the sources of the pollution – and hold manufacturers accountable.

Anthony Kotoun, a multi-class world champion and 11th Hour Racing ambassador based in Newport, Rhode Island, has also found a cause close to home. ‘It started when I got into fishing from the shore,’ he says. ‘We have a wonderful shoreline around Newport, but it’s depressing to see the amount of litter that’s being left behind including fishing gear packaging and line, along with single-use food wrappers and coffee cups – unfortunately it’s pretty obvious that shore-based fishermen are responsible for most of it.’

Kotoun’s solution is a partnership with Mystic Aquarium, funding a programme that helps volunteers patrol the coast and gives them the resources and knowledge they need to communicate effectively with the fishermen. A grant from 11th Hour Racing will train and support the volunteers, who cover a long stretch of coast from Connecticut to Massachusetts. ‘It’s better to prevent than to react, so that’s what this programme is about,’ Kotoun says.

A new recruit to 11th Hour Racing’s group of ambassadors is the French Ultime skipper François Gabart, a Vendée Globe winner and current singlehanded round-the-world record holder. ‘Like a lot of sailors I care deeply about the state of the ocean and the future of the planet,’ he says. ‘The ocean’s health has a huge impact on the environment. It affects all people, even those who live in the mountains.’

Gabart’s 40-strong team is already serious about sustainability: moving into a building powered by solar energy, using life cycle assessment on new Ultime and Imoca builds, and reducing single-use plastics to an absolute minimum. Beyond winning races, he sees the technical innovation of ocean racing teams as a means of acquiring knowledge that can one day be used for freight and even passenger transport.

‘Like everyone else, we need to be more sustainable,’ he says. ‘But as sailors we should be proud of what we achieve with renewable energy.’ He reckons a good way to make yacht racing more sustainable is to introduce an environmental handicap rating system that rewards sustainable practices and encourages teams to use materials such as biocomposites instead of carbon fibre.

‘I’ve become an ambassador for 11th Hour Racing because their message is important,’ Gabart says. ‘I saw what they did in the last Volvo Ocean Race; they have a good set of tools and a great platform to spread the message. I support other environmental causes too, but I am focusing on this one. We don’t have much time left, we’ve got to act now.’