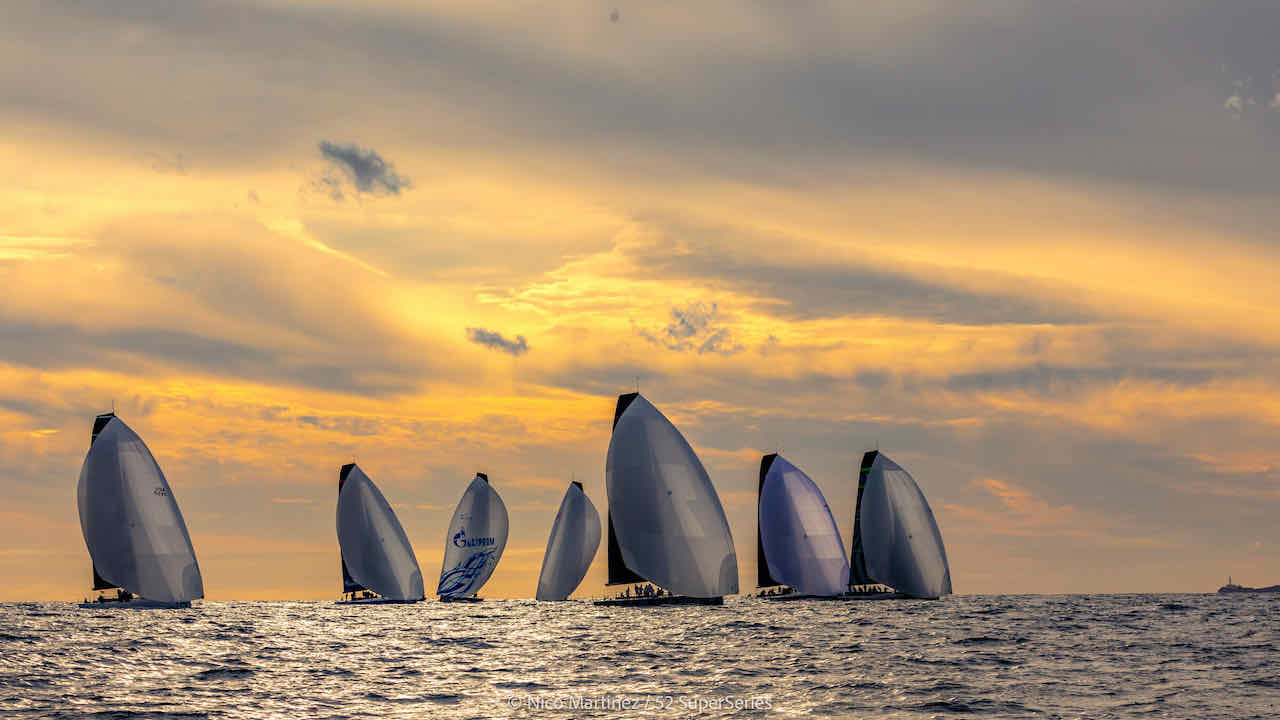 After two solid wins on the opening day Hasso Plattner’s South African flagged Phoenix team lead the Rolex TP52 World Championships and have moved to the top of the overall 52 SUPER SERIES leaderboard with four days of the 2021 season remaining.

With Tom Slingsby and Cameron Dunn combining on tactics and strategy respectively on Phoenix the red hulled TP52 started strongly in both races and led at all but one mark of the two windward-leeward races on a tricky, challenging Bay of Palma. The first race was contested in a very light westerly breeze which was strongest near the bottom of the course and faded towards the windward mark.

The second test was sailed in 8-9 knots. Phoenix showed good speed, especially upwind and sailed astutely with good crew work, defending once they were ahead and, with project manager Tony Norris steering, looking like a team which have all the ingredients to win the world title.

Defending world champions, Harm Müller Spreer’s Platoon had to work hard for two third places, but showed a dependable ability to get themselves up the fleet, or hold their position when needed. The German flagged crew lie second on six points ahead of Sled and Quantum Racing which both aggregated nine points for the day.

Phoenix made a great start to the first race and led at the windward mark ahead of Tony Langley’s Gladiator, Andy Soriano’s Alegre and Vladimir Liubomirov’s Bronenosec. Vasco Vascotto called an early gybe on Bronenosec and they closed up to second, actually leading around the second top mark before Phoenix pulled away again on the second run to win.

The second start was much more even with Phoenix, once more edging ahead. Platoon were second and the two leaders opened up a gap to third. On the final run Platoon, in the middle of course, had to choose between covering Sled on the right of the downwind and Interlodge advancing on the left.

Sled stole second and Platoon only just held on to third in a photo finish with Austin & Gwen Fragomen’s Interlodge which has Tony Rey steering this week.

“Yes we had two good wins but it was pretty crazy conditions out there, big shifts and we had a bit of luck for sure,” said Phoenix’s tactician Tom Slingsby. “Sometimes we were in the middle of a few boats and we just got a dream little lane of pressure and sort of punched away from everyone. So I suppose maybe a bit of luck but some good positioning, the guys were sailing really well. We were fast upwind. Two good results but it’s the first day out of five so we have a long way to go.”

Of the dream first start Slingsby said: “I saw a photo from the start at the gun – I think we were a foot behind the line and we were doing about 9 knots. That’s as good as you want it but it was brave as well we were a long way ahead of all the boats around us, so maybe risk management will come into play a bit more now we’re doing pretty well.”

Asked about his Kiwi counterpart Cameron Dunn, Slingsby commented: “He’s amazing, he’s been with this team for a long time. He’s got the respect of all the guys – and I’m just sort of a ring in. Having him on board, it’s great, I run all my thoughts past him. It’s great to have a really good set of eyes helping me and getting us round the track well. Day one of five but I’m not going to count my chickens – we’ve got breezier days coming.”